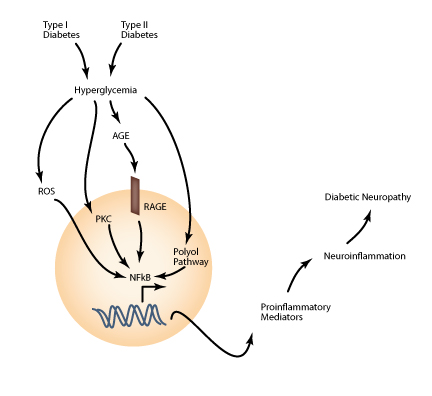 Diabetic neuropathies include a range of dysfunctions of the peripheral nerves that can be broadly categorized into generalized symmetric polyneuropathies and focal/multifocal neuropathies. Diabetic neuropathy (DN) is the most common long-term complication suffered by individuals afflicted with either type 1 diabetes (T1D) or type 2 diabetes (T2D). It is the leading cause of non-traumatic amputations and results in significant morbidity, mortality, and economic burden. Of patients suffering from DN, approximately 30% experience pain that is severe, debilitating, largely unresponsive to current pharmacotherapies, and persistent for several years. DN pain is often localized to the feet, described as “burning” or “sharp,” and worsens at night or during periods of fatigue or stress. DN pain can be spontaneous and/or can be in the form of either allodynia (pain caused by a normally benign stimulus) or hyperalgesia (exaggerated pain caused by a normally mildly painful stimulus) or both. [1-3]

Hyperglycemia is a known contributor to DN pathogenesis, although advanced age, obesity, hyperlipidemia, and hypertension appear to be risk factors as well. While there is agreement within the biomedical research community that DN pathophysiology is multifactorial, there is no consensus yet as to the precise mechanisms of DN development and progression. A few of the potential pathophysiological mechanisms currently under investigation include activation of the polyol pathway, accumulation of advanced glycation end-products (AGE), oxidative stress, and neuroinflammation. To complicate matters further, all of these mechanistic pathways appear to be interrelated. [1-3]

To highlight just one of these, neuroinflammation, is to delve into an extremely complex web of interacting cells and signaling molecules from both the nervous and immune systems. Neuroinflammation in the context of DN is initiated via a variety of stimuli. Hyperglycemia directly promotes activation of protein kinase C (PKC), which has many down-stream effects including activation of the transcription factor NF-κB and the enzyme NADPH oxidase. NF-κB is responsible for promoting the transcription of a variety of pro-inflammatory genes, which once synthesized and released serve to amplify inflammatory signals in paracrine and autocrine fashions, recruit circulating pro-inflammatory leukocytes, and promote apoptotic cell death. NADPH oxidase promotes further production of reactive oxygen species (ROS) already elevated as a result of the hyperglycemic environment. ROS, regardless of their mode of production, also directly promote NF-κB transcription activity. Further, elevated AGE levels cause activation of the AGE receptor (RAGE), which additionally promotes NF-κB transcription of pro-inflammatory genes. Finally, metabolites in the polyol pathway can stimulate activation of PKC and thereby contribute to neuroinflammation as well. Figure 1 is a schematic of how these interconnecting pathways converge to promote a pro-inflammatory transcription profile and initiate neuroinflammation, a major contributor to the development and progression of DN. [1,2]

By far the most effective means of preventing and treating diabetic neuropathy is glycemic control. Additionally, there are currently only a few drugs approved for treatment of diabetic neuropathy and these only function to relieve painful symptoms, they do not cure the disease. There are several drugs in clinical trials and many more in pre-clinical development, but additional work is needed to further understand the mechanisms of disease onset and progression and this work requires use of experimental animal models. [1-3] Fortunately, there is already a wide variety of well-characterized rodent models of both T1D and T2D that develop complications including diabetic neuropathies that may be used to better understand the disease and develop more effective therapies.

While there is of course no single perfect animal model for human DN, the most commonly used model is the streptozotocin (STZ) -treated rat. [4,5] STZ is a cytotoxic agent derived from the gram-positive Streptomyces acromogenes bacterium that selectively kills pancreatic β-cells. Administering a single, low-dose STZ injection to healthy, adult rats results in their rapid development of a condition much like T1D in humans, where lack of functional β-cells in pancreatic islets impairs normal glycemic control. Treated animals become hyperglycemic within 72 hours of injection and develop significant neuropathic pain symptoms after approximately 4 weeks. Similar to other neuropathic pain models, the STZ rat model of diabetic neuropathy can be evaluated via a variety of quantitative behavioral tests for particularly mechanical allodynia and both mechanical and thermal hyperalgesia. [5]

The STZ rat model offers a number of important advantages over the other models of DN. Experimentally, the STZ rat protocol is relatively easy to execute, can be precisely controlled in terms of timing of the onset of diabetes symptoms, and consistently generates animals that are permanently and severely hyperglycemic. Further, there is a sizeable volume of published literature already available using this model, which offers researchers an important resource for comparing their findings to other laboratories and advancing their drug discovery efforts more quickly. Physiologically, the spontaneous nature of β-cell destruction in human T1D is very similar to what occurs in the STZ rat model and is thus likely more relevant for translational studies than some of the other models. For instance, the GK and ZDF rat models display no and only late hyperglycemia, respectively. Similarly, the ob/ob and db/db mouse models result from mutations in leptin and the leptin receptor, respectively, which are only very rare causes of T2D in humans. Pathologically, STZ rats exhibit serious hyperglycemia, are thus very ill, and suffer from severe DN symptoms. In terms of DN specifically, STZ rats exhibit reduced nerve conduction velocities, compromised endoneurial blood flow, aberrant calcium signaling and mitochondrial function, reduced nociceptive thresholds, activated apoptosis cascades, and indications of demylination and nerve degeneration. These pathophysiological changes result in quantifiable allodynia and hyperalgesia that serve as measures for testing new diabetic neuropathy treatment regimens. [4,5]

Patients with DN suffer from a range of pain symptoms that are chronic and progressive to the point of causing sleep disturbance, reduced mobility, incapacitation, and death. While meticulous glycemic control is the most effective method of preventing DN progression, it is the only method currently available for addressing the disease itself. All other approved pharmacological strategies merely serve to temporarily ameliorate symptoms and are only effective in a subset of patients. Further research is required to develop a more detailed understanding of DN pathophysiology so that new therapeutics can be developed to treat these patients. [1-3] Basic and pre-clinical research using experimental animal models is critical to this effort and the well-established STZ rat model has served and will continue to serve as an important translational model of human DN. [4,5]

The management of post-operative pain is a challenge for both physicians and patients. In addition...

Osteoarthritis (OA) is a widespread condition that affects greater than 70% of the elderly...