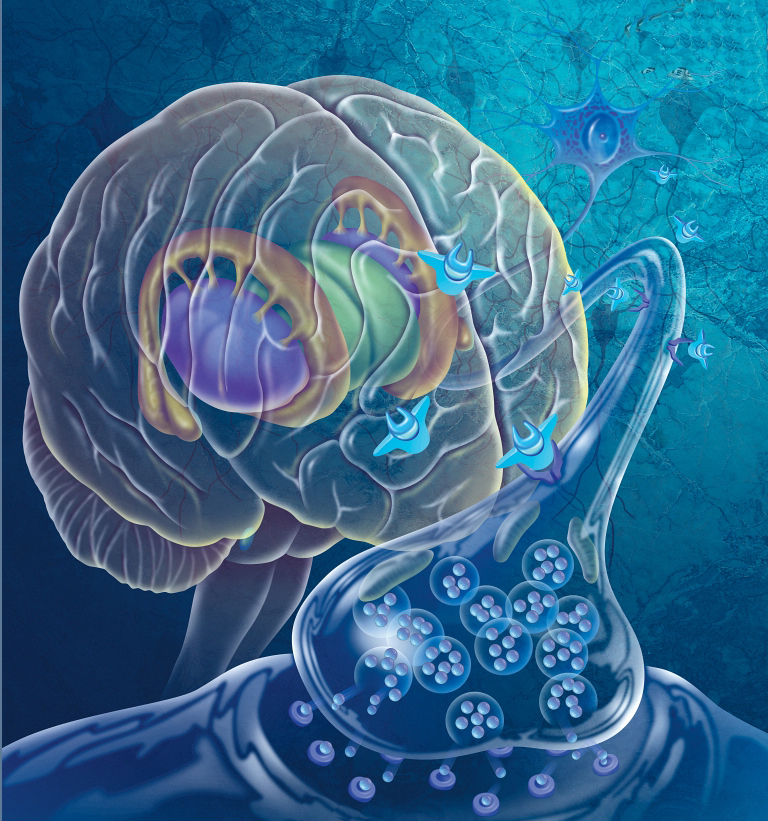 The 6-hydroxydopamine (6-OHDA) model of Parkinson's Disease (PD) was the first model of PD generated, and has since been widely used to investigate parkinsonism in rodents. The model was originally developed following the discovery that injecting 6-OHDA into the substantia nigra pars compacta (SNpc) caused anterograde degeneration of the nigrostriatal dopaminergic system, producing a loss of dopaminergic neurons in the SNpc and loss of dopaminergic terminals in the striatum (to which the SNpc projects), similar to that observed in Parkinson’s disease. 6-OHDA is similar in structure to dopamine, but the presence of an additional hydroxyl group makes it toxic to dopaminergic neurons. Once in the cytosol, 6-OHDA auto-oxidizes to form reactive oxygen species, which are thought to cause neurodegeneration by reducing levels of anti-oxidant enzymes, elevating iron, and inhibiting mitochondrial respiration. The main features of this model that have made it popular are that it is relatively fast, inexpensive and simple to implement, and that the lesions it produces are reproducible and substantial.

Contributions to understanding and treating PD

The 6-OHDA model has contributed significantly to our understanding of Parkinson's Disease (PD) and the development of treatments. It has been used to help understand the mechanisms of PD pathogenesis and the roles that neurodegenerative processes, such as free radical generation, energy crisis, complex I blockade, and inflammation have in PD. The model has been used to test the efficacy of new experimental therapeutics, including those designed to treat motor symptoms, slow cell death, replace lost neurons and alleviate dyskinetic side effects. It has helped improve understanding of the physiology and circuitry of the basal ganglia, the role of dopamine receptor subtypes and the side effects of various PD treatments. And, it has contributed to the development of L-dopa therapy and deep brain stimulation. Many of the drugs in clinical use today, with the exception of anticholinergic medications, have shown efficacy in 6-OHDA lesion models [1].

Assessing validity of the 6-OHDA model

In vitro models attempt to capture as many of the hallmarks of PD as possible. But because no model can recapitulate all the behavioral, histopathological or molecular aspects of a disease, models must be selected on the basis of being the most suitable for the question being asked and the specific objectives being pursued.

A key measure of the performance of any model is model validity, assessed from the three perspectives of face validity, construct validity and predictive validity. The 6-OHDA model scores well in all three categories.

Face validity assesses how well the model reproduces the symptomatic and histopathological hallmarks of the human disease, such as rigidity, tremor, postural instability, bradykinesia, akinesia, as well as selective degeneration of dopaminergic neurons, dopamine depletion, and the presence of Lewy bodies. Ideally the model would also mirror the more minor characteristics of the disease, such as the lesion of non-dopaminergic neurons, involvement of other transmitter systems, and the non-motor symptoms like as cognitive decline, depression and anxiety.

The 6-OHDA rat model reproduces well the neurodegenerative profile and dopamine-related features of the disorder, but the presence of Lewy bodies, the pathological hallmark of PD, has never been observed. The rat behavioral and cognitive repertoire will never mirror that of the human, but some PD symptoms, e.g. akinesia, bradykinesia and postural instability lend themselves to examination by the 6-OHDA model. It is still not clear whether the 6-OHDA model shows face validity for the non-motor symptoms.

Construct validity examines similarities in pathogenesis between the model and the disorder, e.g. in the case of PD, the involvement of oxidative stress, respiratory inhibition, and inflammation. In PD patients increased oxidative stress, diminished levels of anti-oxidant enzymes, mitochondrial dysfunction (i.e. respiratory inhibition), an increase in inflammatory markers, and activated microglia have all been observed in dopaminergic neurons.

Although the mechanism of 6-OHDA toxicity is not completely understood, it is known that oxidative stress, mitochondrial dysfunction and probably inflammation are involved. In the cytosol, 6-OHDA oxidizes to form reactive oxygen species that reduce the levels of antioxidant enzymes, raise iron levels, and interact with complexes I and IV of the mitochondrial respiratory chain, leading to further oxidative stress. Inflammatory processes have been suggested by studies using the PET ligand PK11195, which showed activated microglia in the striatum and SN of 6-OHDA lesioned rats [reviewed in 1-3].

Over the next few weeks, we will continue discussing the 6-OHDA model, it benefits, drawbacks, various sites of dosing and outcomes expected as well as the behavior tests and what they tell us.

What PD in Vivo Models Revealed About Pathogenesis & Treatment

A minipig Model of Incisional pain

The use of animal models for the research of post-operative pain (POP) has been well described[1]....