Multiple sclerosis is a disease in which the immune system attacks the myelin sheath that covers nerve fibers. People suffering from this autoimmune disease develop various neurological symptoms that are caused by damage to the nervous system. In the early stages of disease, symptoms vary, making it difficult for doctors to identify them as early stages of MS. Evidence suggests that multiple sclerosis actually starts long before the diagnosis is made.

Patterns show that individuals have significantly higher numbers of doctors visits in the years leading up to diagnosis. Researchers have recently indicated that it is suspected that unrecognized MS relapses cause people to seek medical attention, and even though the disease has not been diagnosed, it is in the fully active phase. As with any disease, early diagnosis leads to better treatment.

Multiple sclerosis starts long before diagnosis. Is it the same in EAE models?

For researchers working on drug development, understanding the disease pathology, progression, and mechanisms underlying disease is equally as important for effective treatments. In development, models that are commonly used for studying MS mechanisms are induced using myelin oligodendrocyte glycoprotein (MOG) or myelin proteolipid protein (PLP), which mimic the human MS condition in animals. In the MOG-induced EAE model, disease is induced on day 0 and the first clinical signs begin to present between day 10-12. 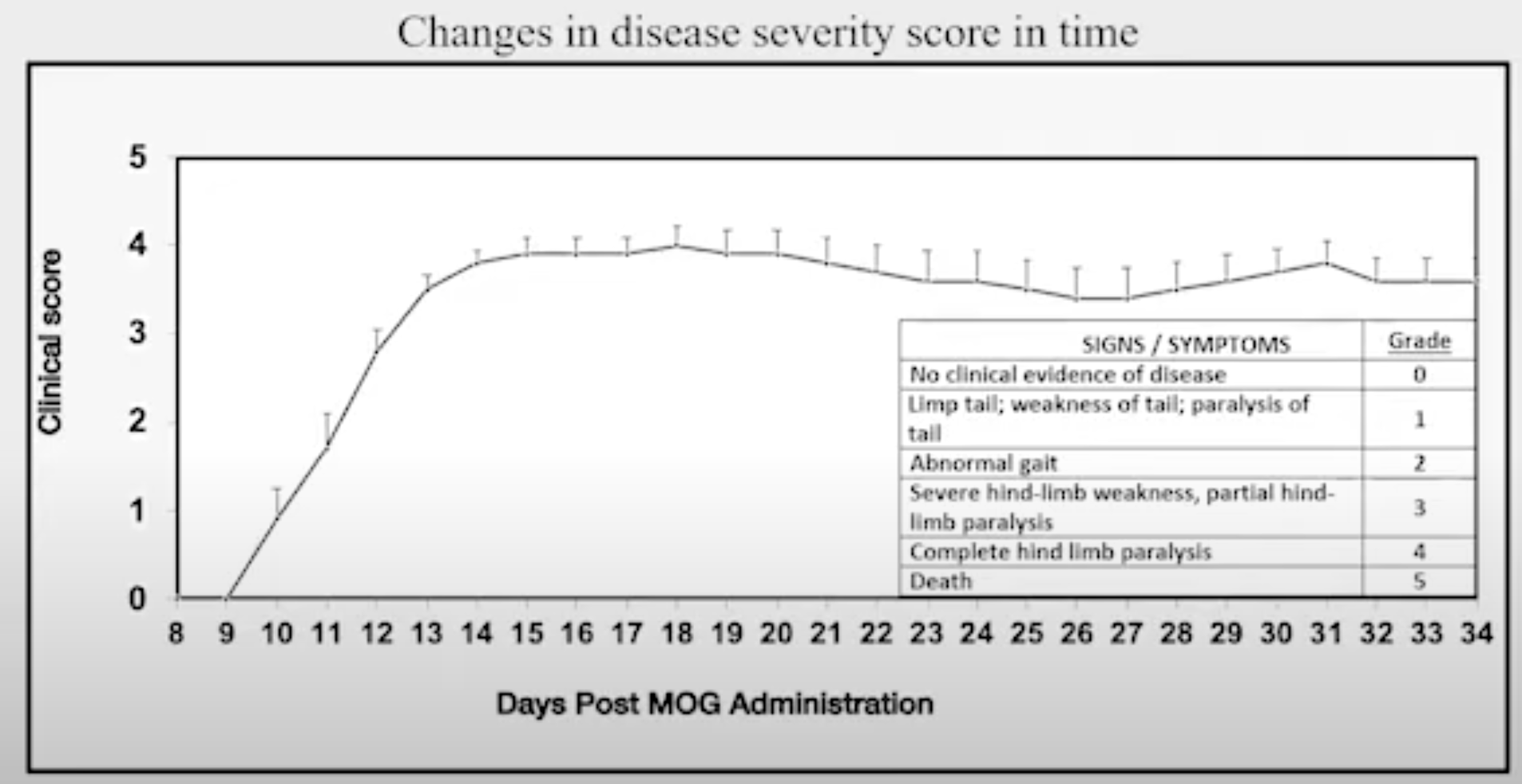 Based on the understanding that human symptoms of disease vary widely, and the realization that disease was present and active long before clinical diagnosis, are we certain that the first signs of clinical symptoms in animals is the start of disease?

Our team of scientists set out to answer this using Electrophysiology and measuring the sensory evoked potential (tcSEP) and motor evoked potential (tcMEP) in MOG-induced EAE animals. In looking at the recording of the tcMEP, the amplitude goes up and then down in a naive animal as well as in mild EAE animals, and decreases in animals with severe disease. This is what we would expect to see based on the clinical score. 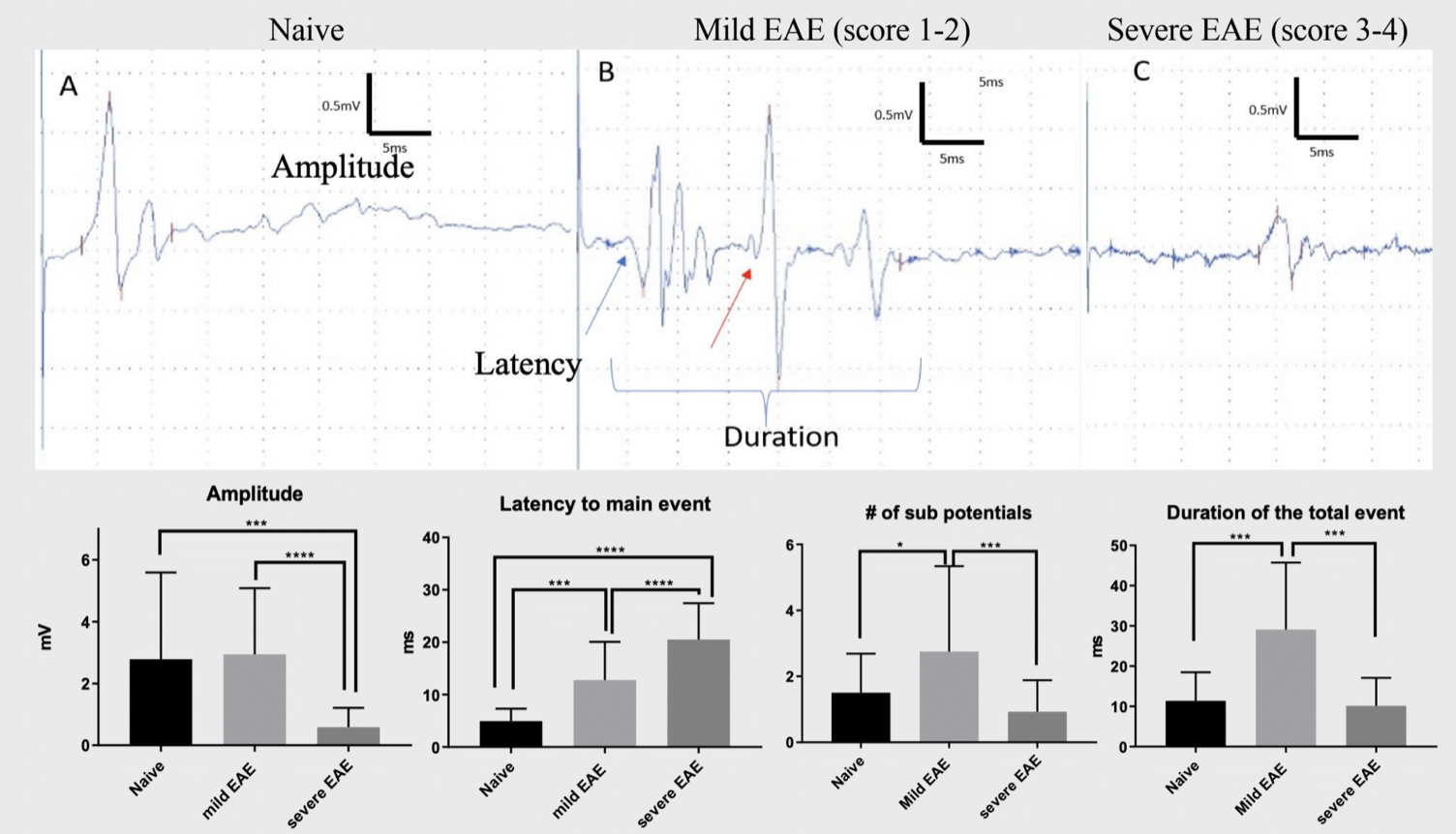 Does P25 in tcSEP really help us understand early symptoms of disease?

In MOG-EAE, 10-12% of the animals never develop clinical signs. We wanted to understand if those animals are truly disease free. In measuring tcSEP in naive animals vs animals that were dosed with MOG but never experienced clinical signs, we can see that the P25 shows an increase over naive, indicating that changes in the sensory system may be an early indicator of what will occur in the motor system. 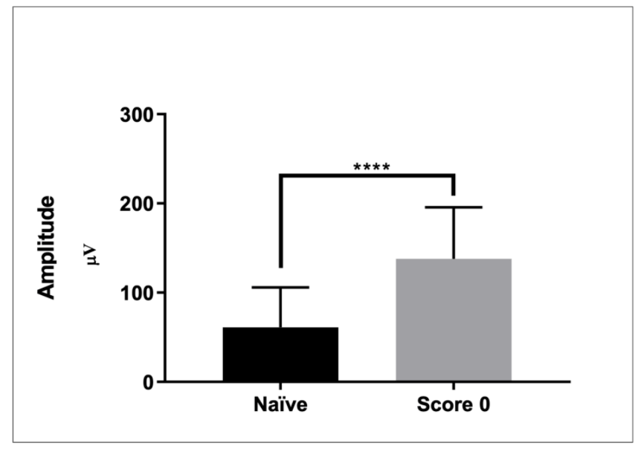 Figure: high SEP in MOG-induced EAE animals that did not develop motor dysfunction.

In the same way that physicians need to understand symptoms that will lead to earlier diagnosis of disease in the clinic, researchers need to understand the pathology and early disease progression in animals for effective and early treatment. tcMEP is a possible tool for distinguishing between mild and severe disease objectively, allowing the identification of different stages in the progression of disease. Monitoring the P25 wave in tcSEP allows for early identification of disease, which helps in understanding a prophylactic vs therapeutic approach to dosing. It can also be used to monitor disease progression as well as response to treatment. 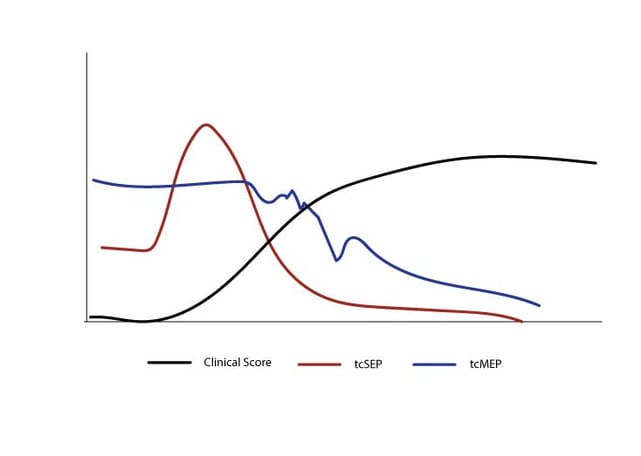 Cognitive impairment is common in multiple sclerosis (MS), occuring at all stages of disease. It...

electrophysiology: an in vivo biomarker for neurology models