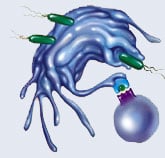 Previously we discussed various interactions that occur between the immune and nervous systems that are potential contributors to neuroinflammatory disorders. In this post, we will call out some of the specific cells involved in these interactions.

At the anatomical level, neuro‐immune interactions have been shown to take place all along the pain processing pathway. This is partially facilitated by increased permeability of the blood‐brain barrier following SCI or peripheral nerve injury [1]. At the cellular level, neuro‐immune interactions involve leukocytes including mast cells, neutrophils, macrophages, and T cells as well as glial cells with immunelike functions including Schwann cells and satellite glial cells in the PNS and microglia and astrocytes in the CNS. Alterations in glial cell function other than those associated with immune cells, immune system signaling molecules, or immune‐like functions of glial cells (i.e., alterations in neurotrophic factor signaling, potassium ion buffering, neurotransmitter re‐uptake, or gap junction maintenance) are outside the scope of this review and are not included here.

Mast Cells: Resident tissue mast cells become degranulated at the site of nerve injury and release histamine, serotonin, proteases, prostaglandins, and a variety of cytokines. Some of these are capable of sensitizing (histamine and TNF) or directly activating (serotonin) nocicpetors, and recruiting neutrophils and macrophages to the wound (histamine and TNF), initiating inflammation and resulting in hyperalgesia. In rats following PNL, these effects can be significantly reduced by chemical prevention of mast cell degranulation. The mechanism by which mast cells are triggered is yet unknown. [2]

Neutrophils: Neutrophils rapidly infiltrate the site of nerve injury (peaking at approximately 24h), responding to chemoattractants such as NGF and MCP‐1, and promote the inflammation process by releasing pro‐inflammatory cytokines (IL‐1β, IL‐6, and TNF) and macrophage‐attracting chemokines (MIP‐1α and MIP‐1β). Additional neutrophil activities, particularly within the DRG, have been suggested, but are yet controversial. Nevertheless, the importance of a role for neutrophils is highlighted by evidence that either depletion of circulating neutrophils or prevention of neutrophil infiltration immediately following nerve injury results in the reduction of hyperalgesia and allodynia in rats. [2]

Macrophages: After nerve injury, resident tissue macrophages become active and circulating macrophages are recruited to the wound (beginning at approximately 24h), to the DRG (one week after CCI) and to the spinal cord (after SCI). Knocking down activity of macrophage chemoattractants, MIP‐1α and MIP‐1β , results in a reduction in macrophage infiltration and Wallerian degredation (phagocytosis of dead or dying Schwann cells, axotomized axons, and other cellular debris). Macrophage depletion by a variety of means can result in reductions of hyperalgesia in several neuropathic pain models, though there are some conflicting reports. Further, once activated, macrophages release a variety of signaling molecules that contribute to neuropathic pain (i.e., IL‐1β, IL‐6, TNF, reactive oxygen species, prostaglandins, and Cathepsin S) and pharmacological suppression of activation results in alleviation of symptoms. For example, suppression prevents up‐regulation of sciatic nerve IL‐1β and associated hyperalgesia in mice following PNL. [2]

T Cells: T cells enter sites of nerve injury (onset at 3 days, peak at 3 weeks), the DRG, and the spinal cord (peak at 7 days) and have been demonstrated to have a significant role in the development of neuropathic pain as hyperalgesia either does not develop or is significantly reduced in murine models of T lymphocyte dysfunction. T cells engage in killing activity (Tc cells), interact with glia to increase inflammation and further sensitize neurons, and release pro‐inflammatory cytokines themselves (Th1 and Th17 cells). Giving Th1 cells to CCI‐treated rats lacking functional T cells increases pain sensitivity while giving Th2 cells decreases it, thus implicating the involvement of T lymphocyte derived proinflammatory cytokines IFN‐γ, TNF, and IL‐17. [2]

Schwann Cells & Satellite Glial Cells: Within hours of nerve injury, Schwann cells regain the ability to proliferate and migrate, initiate or up‐reguate the release of a variety of cytokines, chemokines, neurotrophic factors, and other signaling molecules, and begin demyelination. Pro‐inflammatory cytokines are liberated, some of which (IL‐1β and TNF) are shown to directly contribute to hyperexcitability of neurons in addition to their effects on promoting inflammation. Chemokines involved in recruiting macrophages (LIF and MCP‐1) are released. Similar to Schwann cells in peripheral nociceptive nerves, satellite cells in the DRG become activated and begin to proliferate and release proinflammatory cytokines IL‐1β and TNF. It is thought that satellite cells are activated by ATP from damaged neurons via purinergic receptors. [2]

Microglia & Astrocytes: Resident and infiltrating microglia are very rapidly activated (within 4h of injury) by cytokines (IFN‐γ among others), chemokines (Fractalkine and MCP‐1), toll‐like receptor (TLR) activity, ATP (via P2 purinergic receptors), glutamate, and neuropeptides including Substance P from both neuronal and glial sources in the spinal cord and supraspinal targets. Blocking microglial spinal cord infiltration, by MCP‐1 neutralizing antibody or lack of CCR2, result in reduction in pain hypersensitivity in post‐PNL mice. Further, a growing body evidence demonstrates that microglial activation is both necessary and sufficient for induction of neuropathic pain. Peripheral nerve damage induces microglial activation and pharmacological inhibition of that activation reduces both developing and existing neuropathic pain in animal models. Once activated, microglia release pro‐inflammatory and pronociceptive molecules including IL‐6, TNF, nitric oxide (NO), and prostaglandin E2 (PGE2), promoting inflammation and sensitizing nearby neurons.[1-3] Astrocytes in the spinal cord become activated after microglia, beginning at 4 days post‐injury and lasting 3 months or more, suggesting astrocyte participation in maintenance of neuropathic pain. Once activated, astrocytes are known to increase the sensitivity of or directly excite neighboring neurons (via release of reactive oxygen species, prostaglandins, excitatory amino acids, and ATP) and promote inflammation (via the pro‐inflammatory cytokine signaling of IL‐1β, IL‐6, and TNF). Evidence of astrocyte activation post‐injury appears in supraspinal targets of pain processing as well. While specific pharmacological inhibition of astrocyte activation is difficult, use of general glial inhibitors results in reductions in neuropathic pain in animal models. [2]