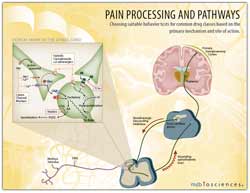 Considering the close link between inflammation and the pain process, preclinical efficacy models that allow the evaluation of both pain and inflammation are crucial to developing new therapies.

One of the prominent features of inflammatory conditions is that normally innocuous stimuli produce pain. The pain process involves several areas which include nociception, pain perception and pain behavior. After tissue injury or nerve damage, neurons along the nociceptive pathway may display enhanced sensitivity and responsiveness. A variety of events and agents can contribute to this sensitization, including the release of inflammatory mediators (such as cytokines or prostaglandins) or the release of algesic substances from damaged cells. Cytokines and prostaglandins are important mediators of inflammation that also have an effect on pain and nociceptors. Cytokines have influence over sensory neurons and may act directly upon nociceptors or indirectly by stimulating the release of prostaglandins, which are considered sensitizing agents and in some cases directly activate nociceptors.

What would efficacy and mechanistic models that allow you to evauate the effects on pain as well as the contributing inflammatory conditions mean for your therapy?

We are continuing our series on the immune system, inflammation related factors and potential drup...

Chronic, destructive inflammation is at the core of a wide variety of diseases and conditions.