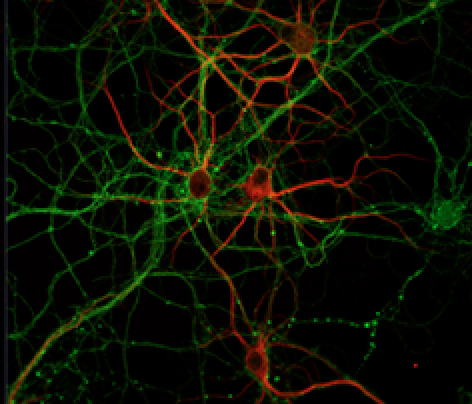 α2-adrenergic receptors (α2ARs) are found in many areas in throughout the nervous system, but the α2ARs on pre- and post-synaptic neurons in the dorsal horn of the spinal cord are the main target for both endogenous and exogenous analgesia. One of the major descending inhibitory pain pathways involves the projection of noradrenergic neurons in the locus ceruleus back down to the spinal cord to activate α2ARs at this site. These receptors can also be targeted pharmacologically through administration of selective agonists or through the inhibition of noradrenaline (also known as norepinephrine) reuptake by drugs such as tricyclic antidepressants.

α2ARs are divided into three subtypes, the α2A-, α2B- and α2C-ARs. All three are Gi/o coupled GPCRs. α2AARs are expressed mostly on the central, pre-synaptic terminals of nociceptors and inhibit VGCC on these terminals to reduce the release of excitatory neurotransmitters such as glutamate and substance P. At the same time, α2CARs, expressed primarily on the second order neurons in the dorsal horn, reduce excitability of these neurons by increasing conductance through GIRK channels [1].

Tricyclic antidepressants (TCAs) are used clinically for the treatment of various neuropathic pain conditions, including nerve injury and diabetic neuropathy. Importantly, their analgesic efficacy is independent of the co-existence of depression in patients. Most TCAs have some action on both serotonin and norepinephrine reuptake, but their analgesic actions are largely mediated by increasing spinal noradrenergic tone coming from descending pathways, which then increases activation of α2ARs to produce pain relief as described above.

Multiple sclerosis is a disease in which the immune system attacks the myelin sheath that covers...

Behavior tests used with the 6-OHDA model of PD, and what they tell us.

6-OHDA lesioned rats exhibit a number of motor behavioral and non-motor impairments which have been...