The rodent has historically been used as the dominant model for the study of pain mechanisms and new therapeutics. There are good reasons for this such as the practicalities and ease of use with small animals as well as the scientific value of having a large database of prior research for predictive validity. The rodent models will continue to be the workhorse driving research and drug discovery, however there is a large failure rate of drugs moving into clinical stages, which failure of rodent models to predict the biology of the clinical condition certainly plays a role. The most well known example of this is the NK1 antagonist that exhibited efficacy-related translational failure in the clinic.

With the high cost of developing new therapeutics and a success rate that is less than 10%, there is a need to validate biological and pharmacological findings in higher order species that close the gap between rodent and man. For that reason, we have developed a pig model of neuropathic pain. The pig was chosen as an optimal model for the following reasons: Results show that the pig neuropathic pain model can detect spontaneous pain behavior, respond to feather and Von Frey stimuli, and measure pain-related biomarkers in the spinal cord and at the site of injury. This model also addresses the complexity of chronic neuropathic pain conditions. Based on this, we suggest, that the pig neuropathic pain model can be used as a valuable tool to further investigate the shift between inflammation-mediated pain, the typical clinical presentation of peripheral neuropathy, and chronic neuropathic pain. This model offers a new, large animal model for peripheral neuropathy, which may help in the development of new therapeutic agents and successful translation to effective clinical therapy. 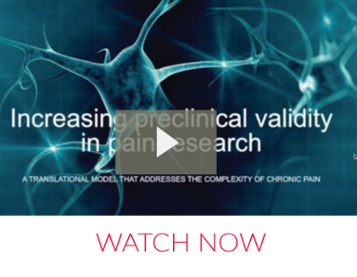 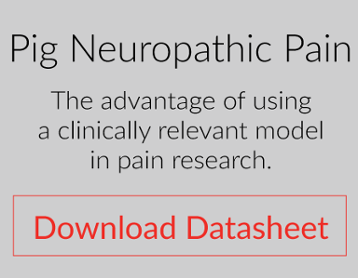 The pig peripheral neuritis trauma (PNT) model is an important transitional model that bridges the...