electrophysiology: an in vivo biomarker for neurology models

Animal models are commonly used in preclinical development to mimic human disease and response. Over the past several decades, drug developers have increased their focus on biomarkers that can indicate changes in the underlying mechanisms and biological pathways. When neurological conditions and pain are involved, neuronal networks are affected making some traditional biomarkers less relevant. Electrophysiology (EP), an in vivo biomarker, provides the ability to study neurological dysfunctions, how the nervous system is affected, and how it responds to various treatments.

Electrophysiology enhances our understanding of neurological and pain indications and can be applied to various models to evaluate the function of nerves.

Case Study: Electrophysiology as a biomarker in MOG-EAE

The MOG-EAE model is commonly used for preclinical development of MS therapeutics. It is characterized by variable onset of disease and disease progression that peaks around day 14 and stays severe throughout the disease course. The severity of the disease commonly leads to paralysis and clinical scores are often unable to differentiate the effectiveness of treatment groups.

Further learning: watch our webinar to learn more about applying electrophysiology to the MOG-EAE model. 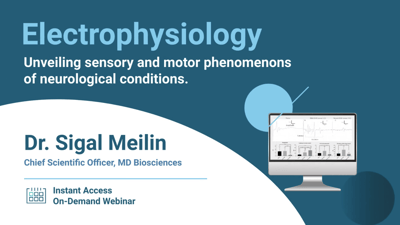 Historically, rodent models have been used for the discovery of various biological mechanisms...

Common models for preclinical efficacy often use rodents as they are readily available, cost...