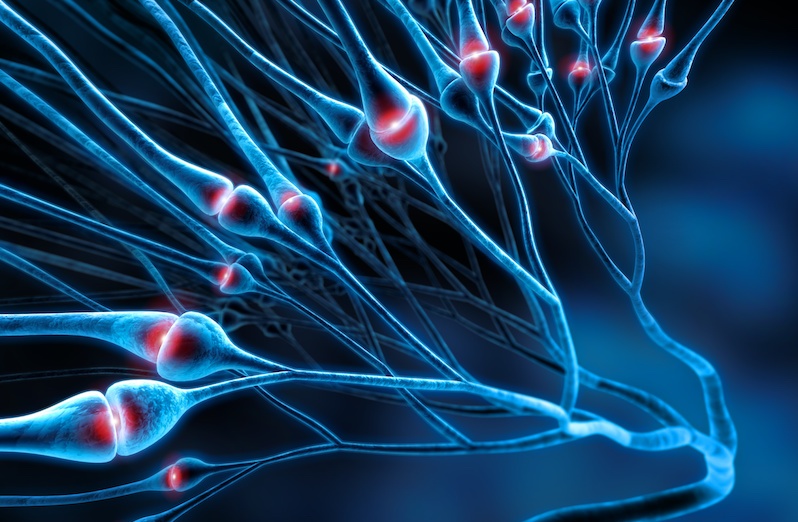 Over the past few weeks we have been reviewing the overlap between the nervous and immune systems. We recently discussed the various cell types involved and are going to move into some of the various inflammation related drug targets that may have potential involvement in neuropathic pain. We'll start with pro-inflammatory cytokines.

Interferon gamma is a type II interferon in which the active form is a soluble homodimer with potent pro-inflammatory properties. It is mainly produced by T-cells. IFN-γ binds the cell surface receptor IFN-γR to initiate signaling.

In the spinal cord, IFN-γ is produced by infiltrating Th1 cells as well as astrocytes and damaged neurons. It has been shown to recruit and activate microglia. Intrathecal application of IFN-γ induces pain hypersensitivity in intact animals and not in IFN-γR-/- animals. IFN-γ also increases neuron excitability and spontaneious firing in the dorsal horn (1, 2).

IL-1β is a power anti-inflammatory cytokine with pleiotropic effects on mny cell types via binding cell-surface IL-1R1 receptor. IL-1b activity is modulated by both the natural receptor agonist, IL-1ra, and the IL-1RII decoy receptor.

IL-6 is a predominantly pro-inflammatory cytokine, though in some contexts can have anti-inflammatory effects. It is produced by a variety of leukocytes and exerts its biological activity by binding the IL-6R, which heterodimerizes with its gp130 signaling component.

Nerve damage results in a local up-regulation of both IL-6 and IL-6R expression as well as an increase in IL-6 found in the DRG. Peripheral nerve injury also induces an increase in IL-6 expression in the dorsal horn of the spinal cord in microglia and neurons. Intrathecal delivery of IL-6 results in pain hypersensitivity that can be blocked by IL-6 neutralizing antibodies. Il-6 mediated signaling induces CX3CR1 expression by microglia following CCI in rats (1)

Tumor necrosis factor (TNF) us a small diffusible homotrimeric cytokine with pro-inflammatory properties and two receptors (TNFR1 and TNFR2) expressed by a variety of cells. TNFR1 is constitutively expressed and when activated results in ligand/receptor complex internalization. TNFR2 is inducibly expressed and when bound results in ligand/receptor complex shedding from the cell surface.

Peripherally, nerve damage results in TNF release from resident mast cells and macrophages, Schwann cells, and infiltrating neutrophils and macrophages locally and from satellite glial cells, neurons and infiltrating macrophages in the DRG. Intraneural injection of TNF in intact rats results in pain hypersensitivity that is reversible with neutralizing antibody. Centrally, TNF is increased, likely as a result of microglia and astrocyte activity, in both the spinal cord and supraspinal targets. TNF encourages neuronal hyperexcitability (via its effects on neuronal cation channels) and inflammation at all locations along the pain processing pathway (1, 4).

Considering the close link between inflammation and the pain process, preclinical efficacy models...

We are continuing our series on the immune system, inflammation related factors and potential drup...